How to admit you are scared of the competition. 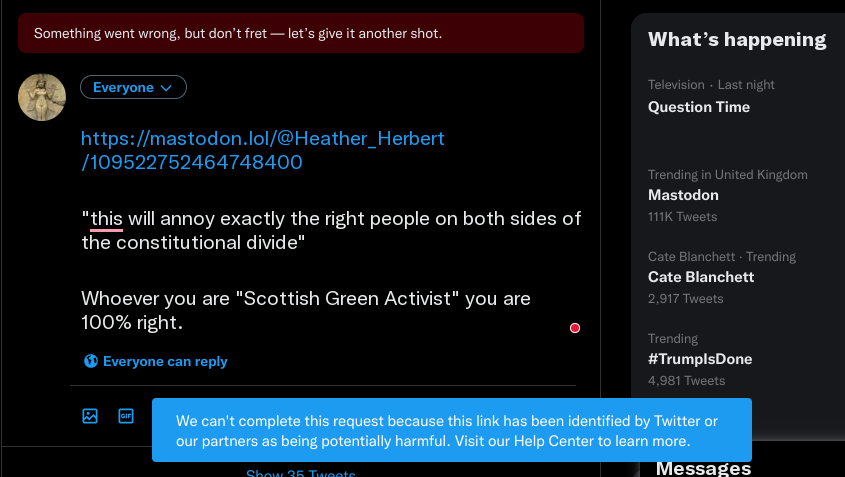 How to admit you are scared of the competition.

A merchant who approaches business with the idea of serving the public well has nothing to fear from the competition.

Space Karen, Elon Musk, is scared; scared of the competition.

This morning I posted the following toot on Mastodon.

It’s in reference to the Scottish budget, where the Green/SNP government has diverted the £20 million we set aside for indyRef2 towards support vulnerable people against rising energy bills. An absolutely correct thing to do in my opinion.

I also attempted to post this on tweeter, except I replaced the link with a link to the original toot … it was then I got a surprise.

Digging into this a little more I discovered not only is he blocking links to Mastodon but he’s also kicked the official Mastodon account, off Twitter.

But maybe this is legit, I hear you say. After all any sysadmin knows it only takes one bad actor to trash a domain’s reputation. So I checked.
VirusTotal is a great resource. It runs suspect files or websites through a battery of tests. It uses 91 different anti-virus applications to check if a file or website flags as potentially harmful. How meany engions do you think flagged my mastodon profile?

Yes that’s right zero. Not a single one of the 91 pieces of anti-virus software thorght my Mastodon profile was “potentially harmful”.

I would reach out to Twitter to get their reason for this but all their comms staff were sacked.

It’s official, Musk is scared of the opposition. Despite him claiming otherwise initally.

One thought on “How to admit you are scared of the competition.”