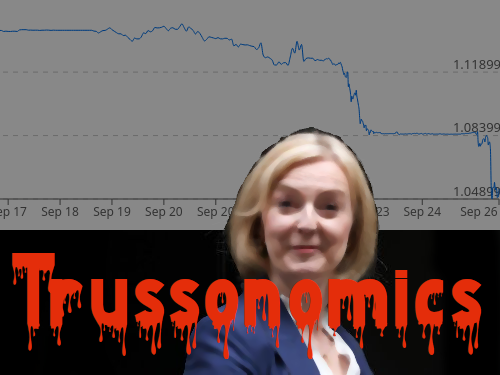 The rich are always going to say that, you know, just give us more money and we’ll go out and spend more and then it will all trickle down to the rest of you. But that has not worked the last 10 years

Once you realize that trickle-down economics does not work, you will see the excessive tax cuts for the rick as what they are — a simple upward redistribution of income, rather than a way to make all of us richer, as we were told.

Unless you’ve been living under a rock for the last week or so you will have heard about Liz Truss’s new chancellor’s “mini-budget” and the complete disaster it has been. Is Liz Truss a secret Marxist, bringing down capitalism from within, as some have suggested? Is Kwasi Kwarteng deliberately crashing the economy to make a few quid? Or is there something else at work?

Neither Kwasi Kwarteng nor Liz Truss are stupid people. Kwarteng was part of the team that won University Challenge in 1995. Truss is a Chartered Accountant and company director before getting involved in politics. Despite the conspiracy theory (both joking and otherwise) neither wants to destroy the economy.

So what’s going on?

Both Truss and Kwarteng want the same thing, what the Spectator has called Trussonomics. Trussonomics is an extreme version of what is technically called supply-side economics, the standard neo-liberal model of economics. Which involves lowering taxes, decreasing regulations and allowing free trade.

How should Trussonomics work?

Trussonomics postulates that reducing taxes for the top earners will put more money in their pockets and encourage them to spend money. This spending ends up in the pockets of the workers who build the cars, the yachts and the gold-plated iPhones.

If this sounds familiar you are not wrong, in the 80s it was called trickle-down economics or Reaganomics. Which its supporters claim it ended the stagflation of the 70s.

If you remember the 80s you’ll remember that business and the “market” loved Reaganomics and its implementation in Britain, Thatcherism. So why has the market crashed as a result?

In the 1970s inflation in the UK was through the roof, and growth was extremely low.

In the UK today, inflation is running at about 8% and growth is low however unlike in the early 70s this is due, almost completely, to the twin factors of COVID, lowering growth, and energy price rise fueling inflation. If we look at the inflation rate before the war we see a very different picture.

Inflation has been historically low.

However, one effect of trickle-down economics everyone agrees on is that it will increase the national debt. This is OK if you have high-interest rates, as they reduce the debt over time. As we’ve seen, however, interest rates aren’t that high. The national debt, however …

This has, to put it mildly, scared the “Market”.

To put it simply, the higher the national debt the more expensive it is for the UK to borrow money and the more it costs to “service that debt” i.e. make the regular payments on it.

This is why the pound has crashed, it is also a worry for people like you and me, who aren’t hedge fund managers because it means the government has less of an ability to spend our way out of trouble (as was done with COVID). Over time the government needs to pay that back (or interest rates needs rise to absorb the debt) which means less money to spend on things like the NHS and welfare.

Additionally, everyone who has looked into the theory, says it only makes wealth inequality worse. from the US left of centre website the hill to the right-wing daily express.

Is there a better way?

We’ve seen how Trussonomics isn’t fit for purpose, doesn’t work, will increase wealth inequality and damage the economy all at the same time.

But it’s easy to complain from the sidelines, but what should we do instead?

If giving tax breaks to rich folk hurts the economy, it may seem counterintuitive, but giving people from lower social demographic groups, helps the economy.

With some exceptions, the less income you have the greater percentage of it you spend and you tend to spend it in the local economy as well.

While a discussion on Universal Basic Income is beyond the scope of this article. Any system which puts a greater fraction of the country’s wealth in the hands of the “Bottom 90%” increases the amount of money in circulation, and therefore the wealth of the country in general.